September 24, 2020 – Well, it’s been an interesting few weeks. After losing both of my parents and a covid-like illness (I was negative!) I’m back. We won’t talk about my flying! That’s another issue. But things are moving forward with this project.

I looked more into locating various items in the airplane. Because of proximity to antennas, I decided to put the ADSB-In box back there, as well as the transponder. Van’s sells brackets that are for an ELT or strobe power supply. I decided to get one each for the left and right, one for the ELT in the future, and one for the ADSB. Because the ADSB antenna is on the right side, that’s where I placed this bracket.

Access to install this bracket was a pain. It attached between two stringers behind the baggage compartment. It fits fantastically, but it gets pop-riveted in place in the stringers. Note to self: install the lower rivets first, then the top ones.

My darling wife came out to the hangar and helped me install the ADSB and transponder antennas.

I also ran the coax cables for the com antennas.

I think the biggest part of this project is going to be the com harness. This connects the two transceivers, the intercom, and the two radio control heads in the panel. Dynon does not sell a harness for the whole thing, but they do sell one for the intercom, which appears to be the heart of the machine. Because I have two coms instead of the one officially supported by Dynon, I found out I had to add two pins to the intercom harness. Took me two tries because I wasn’t paying attention to what I was doing, but I got that done.

After much head-scratching and consultation with experts on the airport, I called Stein and found out they would sell me a drawing of the entire com system provisioned for my setup.

Armed with this information, I laid out my version of a harness board on my work table, with close approximations of distance and relative positions of each component.

I started with the connectors for the transceivers. 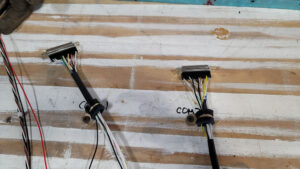 I haven’t closed them up because I need to install the power wires from the VPX.

In order to get distance correct, I wanted to locate the harness in the airplane where the connectors would be. I made up a template out of posterboard with the locations of the three panel items. I’m sure there’s am easier way to do this…

I think before I get too much farther along, I’ll consider starting to get the panel ready to cut.

END_OF_DOCUMENT_TOKEN_TO_BE_REPLACED

November 16. 2017 – Well, it’s been a painful couple of months since my last update. I lost my bride of 32 years in October. I put a post on the front page of this site.

In the meantime, I’ve been whittling away at the brackets for the eyeball vents in the cockpit.

I had the stock vents from Van’s that need to be trimmed to fit in the stock installation.

I REALLY don’t like these vents, so I finally caved in and bought the smaller vents from Stein. Here they are side by side:

I started making templates out of light cardboard. I wanted to integrate the headset jacks in the same bracket. I’d also done some research on the Bose powered headset jacks, but decided to wait on provisions for those.

These brackets have a small 90 degree angle that will have a screw attachment to the lip of the panel. This way the panel will still be removeable (if the need ever arises).

Once I got the brackets made and painted, I dimpled the skin rivet holes and installed them.

END_OF_DOCUMENT_TOKEN_TO_BE_REPLACED

November 18, 2015 – I re-clecoed the subpanel in place after getting the fuel vent lines done.

The first problem I ran into is the outboard corners of the bulkhead forward of the panel interfered with the vent lines. I really didn’t want to redo the vent lines, and I believe this small area is non-structural, so I cut 1 1/2″ off the flange on each side.

The next thing I found was that for some reason, the small angle between the center rib and that same bulkhead didn’t fit correctly. I had made and drilled one, but the holes didn’t line up. Sooo…I made a new one.

With that done, this was something I had been looking forward to.

I pulled out the DJM throttle quadrant I bought at Oshkosh. I knew I would have to engineer the mount for this. It was pretty straight-forward.

I made sure everything was square and straight. Here’s the forest o’clamps:

Then I drilled it. It’s all pretty rock solid now.

Once that was done, I moved on to other things. Seems like I’m running out of things to do before the finish kit comes.